What do children (Age 0 – 15) love doing? Yes, it’s no secret that children* love to play but there is much more than just fun when it comes to playing. It can be the greatest mode of learning for children and brings innate satisfaction to them.

Play, a seemingly simple and everyday phenomenon in a child’s life, is so complex, given the diverse processes involved. So much is happening when play occurs, cognitively, socially and psychologically. Gray (2012)1 describes play as child-directed, initiated and guided by the player according to her wishes, needs and imagination. According to Smith & Pellegrini (2008)2, play is an activity that takes place for its own sake with a focus on the experience rather than an outcome.

Maria Montessori, describes ‘play’ as work for a child. This is because developmentally speaking, play is where children achieve so many developmental milestones. According to Piaget (1932)3, a preeminent developmental psychologist, play is one of the primary contexts in which cognitive development occurs. Play provides the child with opportunities to interact and experience the world around them and thus construct their own knowledge about the world. For example, when a child is playing a simple game like building blocks, with each attempt to build the structure, the child is cognitively trying to construct his own understanding of balance, gravity, and shapes that complement each other. Lev Vygotsky(1978)3, another influential developmental psychologist, asserts that play is significant in that it is one of the first activities in which children consciously impose rules on themselves, rather than just receiving them from others.

What is often missed out while understanding the implications of Vygotsky’s theory of play is the idea that play does not only lead to cognitive development.3 Play has the potential to foster social and emotional competencies such as self-regulation, cooperation and empathy in children as well. For example, when a child is engaging in pretend play pretending to be a teacher, along with the development of language skills, social and emotional skills like self-regulation, and perspective-taking are also at play. The child would have to take the perspective of the teacher and how they would behave while also regulating one’s self by internalizing the teacher’s behavior before scolding a pupil.

Research in the area, even though nascent, suggests play has a transformative power to foster social and emotional competencies among children. In a study by Barnett and Storm (1981)5 children given free play time after watching a stress arousing movie, demonstrated reduction in stress and anxiety in comparison to students who were not given free play time. Pretend play among preschoolers has been seen to be associated with self-regulatory behaviors like cleaning up after play, especially for students reported as impulsive by their parents. (Elias & Berk, 2002)6A research with high schoolers suggests playing and enjoying cooperative board games has a significant effect on students’ perspective-taking skills. (Wang, Doll & Varma 2018)7

“As a child, I never really got access to play as a medium to unwind. It was only when I saw young children around me playing, I wished I had access to play when I was young. As an adult, I understood that I do have the agency to engage in play even in my adult life. Be it solving a 1000 piece jigsaw puzzle or going to the beach and playing in sand, I now consciously engage in play for my well-being” shares Pooja, one of the authors of this article.

Khoj, a school founded in Apni Shala, is an innovative community-based school, in the Indian landscape. Recognizing its efforts, it has been awarded one of the top 10 best schools in the world8. Khoj, with its vision to educate the whole child, is an SEL Integrated school. Apni Shala defines SEL as the process of nurturing cognitive, emotional, and behavioral wellbeing for self and society. This involves creating opportunities to learn and practice related knowledge, skills, and attitudes and creating compassionate and inclusive ecosystems for learners.

Khoj, integrates Social Emotional Learning in its academic curriculum through various modalities like arts, mindfulness practices and play. This article will explore the use of play as a modality to cultivate SEL skills in students at Khoj.

A striking feature in the school’s curriculum design, is the inclusion of 30 minutes of free play time, every morning before academic teaching starts. Khojis are given a wide array of play materials including puzzles, building blocks, educational games, clay, cards, beading games to play with while they engage with their peers in an unstructured learning environment. According to the teachers at Khoj, this feature of the school, which is rarely found in traditional school setups, has definitely increased attendance and enthusiasm for students to come to school.

Free play time also provides an opportunity for teachers and students to develop deeper personal connections with each other and helps in promoting a positive classroom culture. During the interviews with the Khoj educators, a Grade 3 teacher shared one such classroom conversation. Her student was playing with blocks and shared with her, “Didi, yeh dekho mai blocks se kya bana raha hoon (Didi, see what am I making).” On asking what is he making, the student said “Didi, mera ghar chota hai, par mai bada sa ghar bana raha hoon mere papa mummy ke liye (Didi, my house is small, so I am making a bigger house for my parents).”

Academics and SEL through Play

When children are in environments where learning is occurring in a meaningful context, where they have choices, and where they are encouraged to follow their interests, learning takes place best (Hirsh-Pasek & Golinkoff, 2003)2.

According to researchers at Lehigh University, we must not simply alternate didactic/academic instruction with free-play time. Instead, we should devise educational practices that can systematically integrate the play element into the curriculum in ways that promote learning and development.[4]Author, Pooja Bhanushali, is reminded of an instance while observing a Grade 2 Khoj classroom, which is a beautiful blend of academics and SEL through play.  The class was learning to write two-digit numbers through a game. The teacher had a set of placards for each number from 0 to 9 spread on the floor, and the students formed a circle around it. The teacher would call out the names of two students at a time and would read out a two-digit number. The students were required to form the two-digit number using the placards on the floor, as a team within 10 seconds. With some guidance from the teacher, what initially started as a fight with students snatching the placards from each other to form the number first, transformed into collaboration and group work with students giving their placards to their teammate to form the number fast. Playing such a simple game, students that day had practised prioritizing the needs of the group over their individual needs, along with learning numbers!

In an interview with a grade 2 class teacher, she shared that the traditional exam method is not that inclusive enough in the sense that few students are unable to write, some students face test-anxiety while writing exams but can demonstrate their learning via other modalities like play. When play and academics work hand in hand students are able to show what they learnt in different ways and still assessment of the learning could be done. 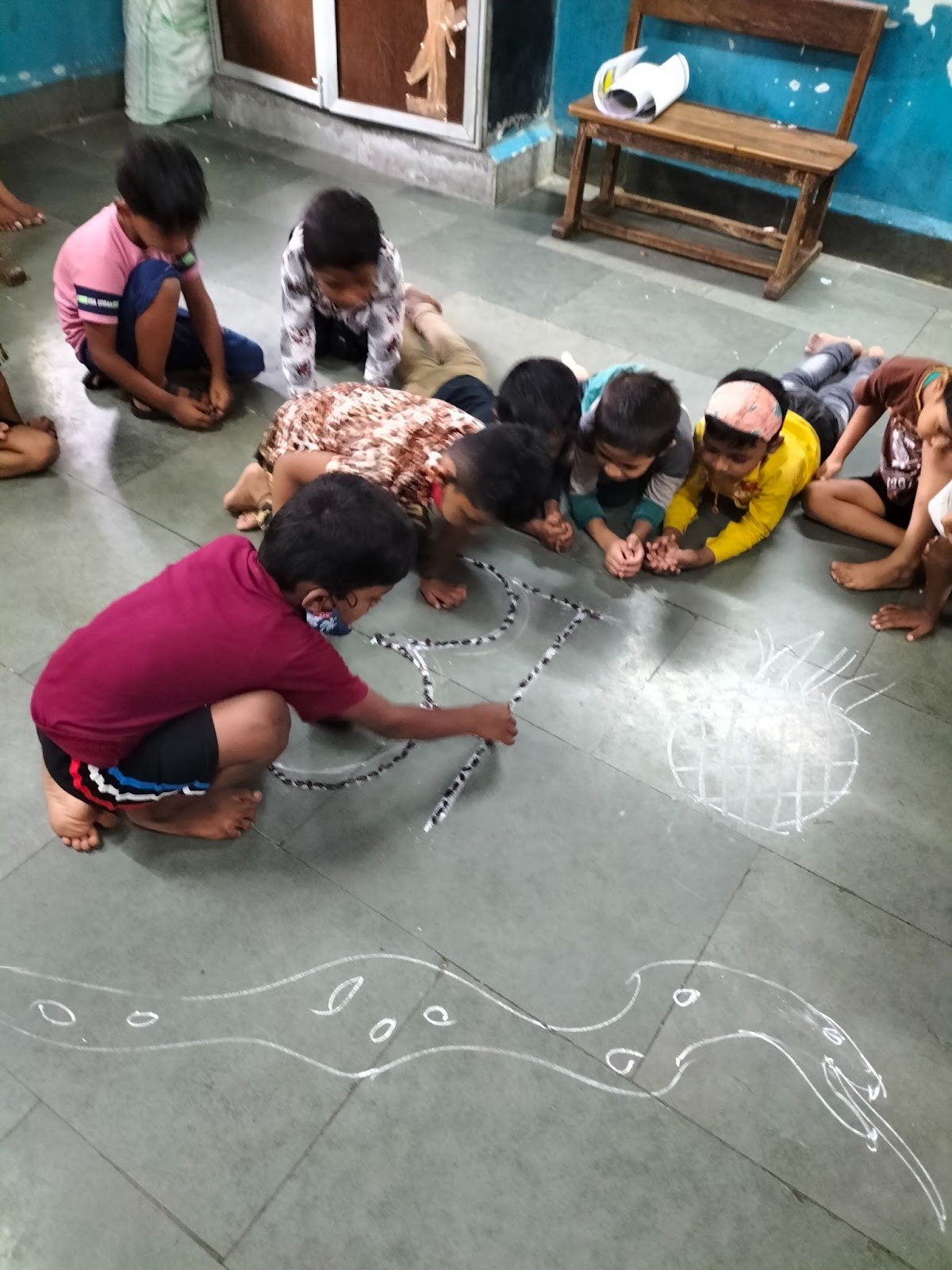 (If learning is from books, then play and games are a way

to see what is learnt

Where there are no restrictions of examination.

It’s their way in which they can show what they learnt.

It is all possible when learning is merged

together with the power of play) 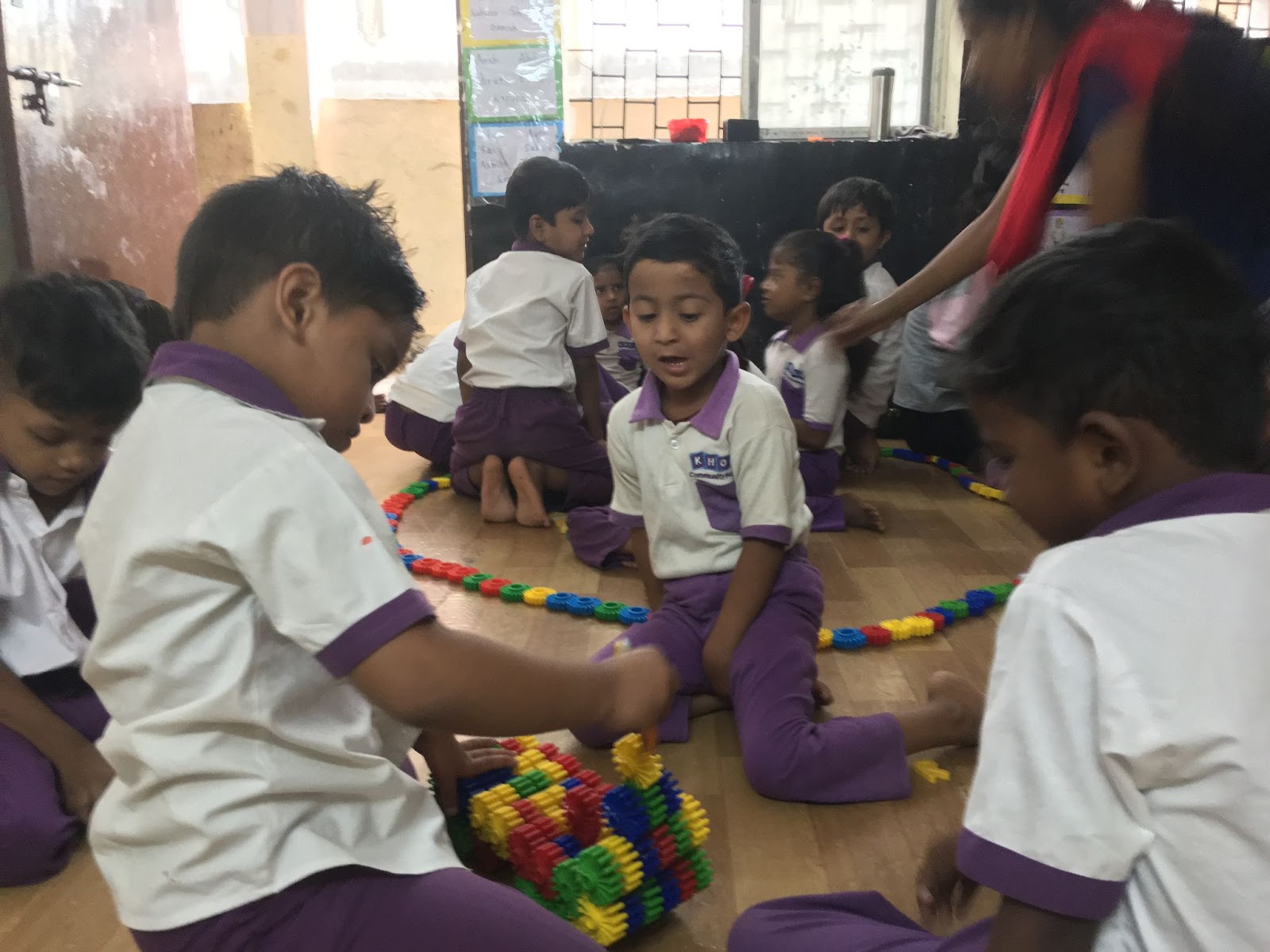 Understanding of gender is seen from a very young age and students are seen to voluntarily choose games that align with their assigned gender roles.

“When I was a child, as a female, the toys which were offered were either soft toys or a kitchen set. Exposure to other toys like cars, blocks, puzzles never happened. And when I started asking for other toys the instructions were very rigid. If I was allowed to get exposure to different toys from soft toys to cars and puzzles, maybe I would have developed an interest for other games too. The knowledge that no game is made for a particular gender would be understood back then. And I would have myself chosen the games which I wanted to play and not what was given to play.” shares Samiksha, one of the authors of this article.

In an interview with Khoj co-founder- Sangeeta Zombade, an interesting theme of gender roles in play came up. She mentions that the team observed students choose certain games to play, based on their gender. Students identifying as females, chose soft toys, kitchen set games etc whereas students identifying as males, chose cars and block games. Khoj team was very intentional in redesigning the structure of free play so as to expose all students to toys that are aligned to the other gender’s gender role. They did this by having 4 colored houses each including gender-diverse toys. If on a particular day, a student decided to play with red house games, the next day they would be encouraged to try other house games. Teachers have observed that doing this has allowed students to express themselves in gender-diverse ways through play.

Hierarchy is historical and in the systems, and culture around us. The systems of the hierarchy have seeped into the classrooms worldwide, and more so in the traditional educational setup in India. Classroom experiences of teachers having an unquestionable authority and students fearing them, is a common occurrence in Indian classrooms. Khoj recognises the prevalence of this systemic hierarchy in the classroom and aims to decentralize power in different ways. Introducing free play time is one such way of redistributing power back to the students for whom the education system is constructed. During free play time, teachers are required to not plan any didactic instructions in the class and to truly let the student voices guide each other through the unstructured play environment. Students have the agency to decide what to play, with whom to play and how to play. It is this agency that helps them practice decision-making and relationship-building skills, which are very much required throughout their adult life.

When asked what would become possible if SEL through play continues to be modelled in other schools worldwide, Samiksha Khandagale pens the following:

(How is it going to be possible? It is a blurry question.

To teach academics, can play be the support which is needed?

Those scared students from the classrooms are finding their fun while playing.

Students with excitement in their heart will come to school if their favorite hour of play is given to them.

They will learn self management by learning self awareness.

They will learn relationship management by understanding relations.

Yes, everything is possible through SEL and play

If there is balance of academics, play and SEL there’s a possibility to have a society with harmonious coexistence.)

Pooja Bhanushali – Pooja joined as a Fellow at Apni Shala Foundation in 2022. At Apni Shala, she facilitates Social Emotional Learning sessions with 4th to 8th grade students from Mumbai Public Schools. Pooja has pursued her Bachelor’s in Psychology from St. Xavier’s College, Mumbai and holds a Masters in Counseling Psychology from S.N.D.T University. In the past she has been a school counselor at a public school in Mumbai. With her experience at Apni Shala, she plans to pursue a PhD in the field of Social Emotional Learning and further the SEL work being done in schools.

* Note: For this article, we have defined children as students from kindergarten to elementary school, as the article specifically looks at play in the context of Khoj school, which caters to students from K to 4.